Laser scanning confocal microscopes (LSCM) are more popular for their sectioning capability rather than for an improved resolution. The improvement in resolution, the point spread function width typically reduced as compared to widefield, is only possible when the pinhole is closed. But a closed pinhole will drastically reduce the SNR. This problem is overcome by using image scanning microscopy (ISM)1. Image scanning microscopy (ISM) is an upgrade of laser scanning confocal microscope (LSCM) where single point detectors like PMTs are replaced by an array detector such as a camera or a SPAD array and the pinhole is kept open to record all available fluorescence2

. But upgrading an existing scanning microscope to ISM is not straightforward. Cameras are usually slow as compared to the scan speed of galvanometric mirrors, hence proper synchronization between the two is a major challenge.

In this study, we make use of the Arduino Due to control both, speed and amplitude of the scan mirrors of an existing confocal microscope (Olympus FluoView). The scanners were provided with the linear ramp voltage synchronized with the frame rate using the two DAC (digital to analog converter) pins of the Arduino Due. The amplitude of this ramp voltage determines the field of view in the sample plane and is controlled by a voltage range shifter circuit.

The system was calibrated using an Argolight calibration slide. Apart from the slight offset in pixel pitch, the system worked as expected. The first data we took was point spread function measurements using sub-nanometer size fluorescent beads. It took roughly two minutes to finish a scan size of 512×512. As can be seen from the figure below, the FWHM in the case of ISM is 157nm which is 1.29 times better than the measured full width at half maximum (FWHM) of 203 nm observed in the case of open pinhole confocal (summed) image. 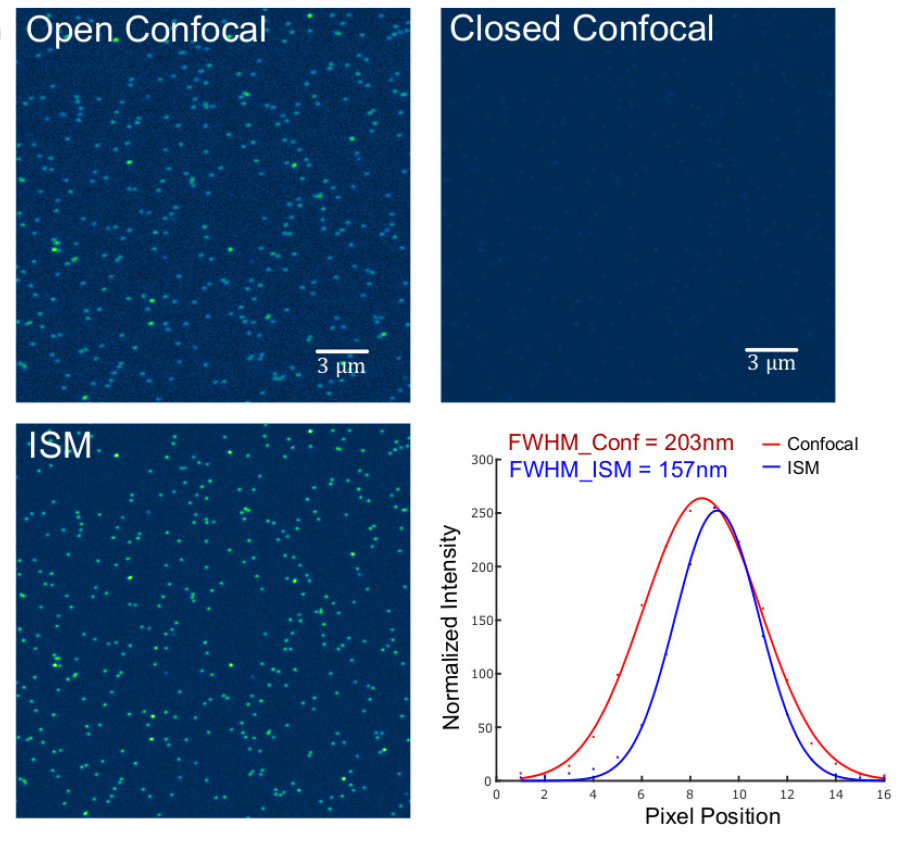