Phagocytosis is the process by which a cell (e.g. macrophage, neutrophil or dendritic cell) engulfs pathogenic or foreign particles, giving rise to an internal compartment called the phagosome.  It is one of the main mechanisms of the innate immune system and a primary response to infection [1].

The aim of this study was to quantify phagocytosis of bioparticles by a RAW 264.7 macrophage-like cell line in a manner that both reduced phototoxic effects and reliably quantified cell fluorescence. In addition, as phagocytosis involves the actin-driven internalization of particles, we sought to monitor the dose-response of the actin inhibitor cytochalasin D on phagocyte behavior.

RAW 264.7 cells were seeded at 10,000 cells per well and allowed to adhere for approximately 24 hours. Cells were then incubated with pHrodo green E. coli bioparticles, which only fluoresce in the acidic environment of the phagosome and concentrations of cytochalasin D (10µM - 1nM). Label-free quantitative phase imaging, with a Livecyte Kinetic Cytometer [5], was used with intermittent fluorescence to automatically track cells over time and measure fluorescence periodically; this enabled investigation of phagocytosis whilst substantially reducing phototoxicity effects. The high contrast label-free images produced by Livecyte facilitated robust segmentation of cells and therefore phagocytosis activity could be quantified reliably by measuring individual cell fluorescence.

This data suggests cytochalasin adversely affects phagocytosis of bioparticles possibly though inhibiting the actin machinery needed by macrophages to internalize foreign particles. It also utilizes single-cell segmentation algorithms and time-lapse imaging to give a reliable reading into fluorescence intensity and further insight into differences between phagoctyic activity throughout the experiment without causing phototoxicity. 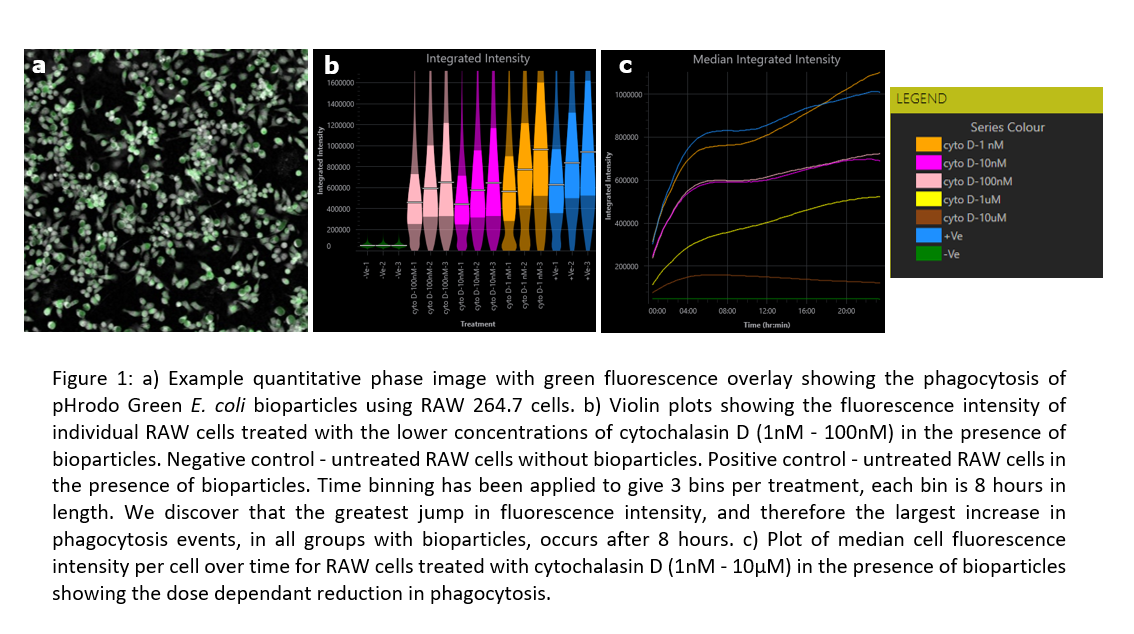 4. Icha, Weber, Waters and Norden, 2017. Phototoxicity in live fluorescence microscopy, and how to avoid it. Bioessays. 39(8).