We present Icy 2 (http://icy.bioimageanalysis.org), which is a major evolution of our previous free and open software for bioimage analysis Icy1. This new version brings the ability to handle larges images which does not fit into the system memory using an adaptive caching engine, thus allowing both visualization and processing of big dataset transparently for users and developers. Along this Icy 2 comes with a totally redesigned web site for improved interactions within the Icy community. The project foundations were strengthened by the use of Maven, providing much more robust development processes for developers and ensuring a better perinity for the project in a whole.

Icy 2 has retained and consolidated the major features that made its success in the bioimaging community, namely to make it available to the bioimaging community an image analysis software suite that encompasses the large variety of biological applications (microscopy analyst, physicist, developer) and to give access to advanced image analysis solutions (particle tracking, HCS/HTS, digital pathology, animal behavior,…) to users. 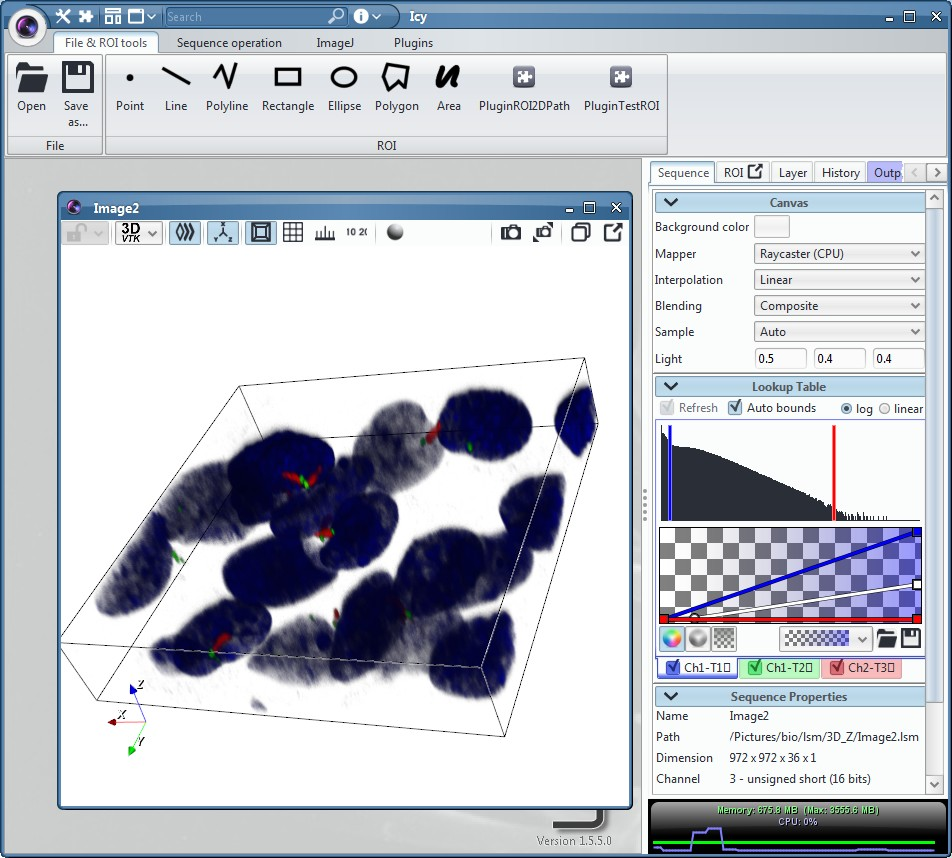 Since its launching, it has been the constant philosophy of the Icy team to promote sharing of source code and know-how and to facilitate the use of quantitative approaches and open new scientific perspectives in terms of exhaustiveness, reproducibility and robustness of the analysis of bioimaging data sets. For those reasons, Icy 2 with its newly redesigned website includes new communication channels between the end-users and the developers, new tutorial materials and improved maintenance cycles. Icy 2 now provides more than 400 dedicated plugins covering a large variety of state-of-the-art image analysis methods ranging from active contours models to Machine Learning through statistical spatial analysis, which empowers users with the most recent and adapted quantitative image analysis and visualization tools. Protocols, which are a graphical front-end that enable software development without any programming knowledge, have also been improved and now include the possibility to develop sophisticated image processing pipelines in a more readable and interactive manner.

Icy 2 has a large community of developers and users (4000+ regular users, 700+ students trained, 1500+ visits per month). For its long-term sustainability and development, the Icy 2 project benefits from the institutional support of the French national Infrastructure France Bio Imaging and of Institut Pasteur. Ongoing work aims at improving the interoperability and convergence of Icy 2 with other open and free image analysis packages as well as facilitating the integration and use of AI packages.