In the colon, long-term exposure to chronic inflammation drives colitis-associated colon cancer (CAC) in patients with inflammatory bowel disease (IBD). Chronic inflammation underlies tumor initiation, promotion, invasion, and metastasis. While the causal and clinical link between chronic inflammation and CAC is well established, we lack a molecular understanding of what is the way in which chronic inflammation leads to develop colon cancer. Within the tumor, cancer cells are surrounded by a variety of non-malignant cells, such as macrophages, endothelial cells, neutrophils, cancer-associated fibroblasts (CAFs), and together with the extracellular matrix (ECM) they compose the tumor microenvironment (TME), also termed the stroma. Even the most aggressive cancers depend and interact with their environment mostly through secreted factors. Unlike cancer cells, stromal cells are genomically stable and do not harbor oncogenic mutations that could drive their co-evolution and functional reprogramming. Rather, stromal reprogramming is thought to be achieved by transcriptional rewiring. Previous work by us and others has shown that the master regulator heat shock factor 1 (HSF1) plays a crucial role in this process, by mediating a transcriptional program in fibroblasts that enables their reprogramming into cancer-associated fibroblasts (CAFs) to promote malignancy. We hypothesized that HSF1 plays a crucial role in inflammation-driven cancer by initiation of a transcriptional program that leads to changes in the extracellular matrix (ECM).

We found that, in cell culture, cancer-induced ECM assembly by fibroblasts requires HSF1. Using an inflammation-driven cancer model in mice, we measured the changes in proteomic and ECM organization over time. We found that HSF1 drives a transcriptional program that leads to ECM remodeling in early stages and results in development of colon cancer. Loss of HSF1 prevents inflammation-induced ECM remodeling. Further to that, in CAC patients, we found high activation of stromal HSF1 and a proteomic signature similar to that driven by HSF1. Thus, HSF1-dependent ECM remodeling mediates the transition from chronic inflammation to colon cancer.

In this research, light microscopy was the main tool to observe our findings. We started with pathology scoring on whole slide images. In aim to validate the targets we found by using proteomic method (Mass spectrometry), we continued with multiplex immunofluorescence imaging- imaged with confocal microscopy. In parallel, we used 2-photon microscopy to examine how the ECM changes in cell culture and also in the colon of mice, throughout the progression of the disease. For that, we used Ilastik pixel classifier combined, with a code we wrote in Fiji (available here: https://doi.org/10.5281/zenodo.4172577). In addition, we performed decellularization of the colons and recellularization with cancer cells to obtain whether the differences in the ECM attract the cancer cells in a different way. For that aim, we used 2-photon microscopy with HeNe 633 laser, and analyzed the images with Imaris. 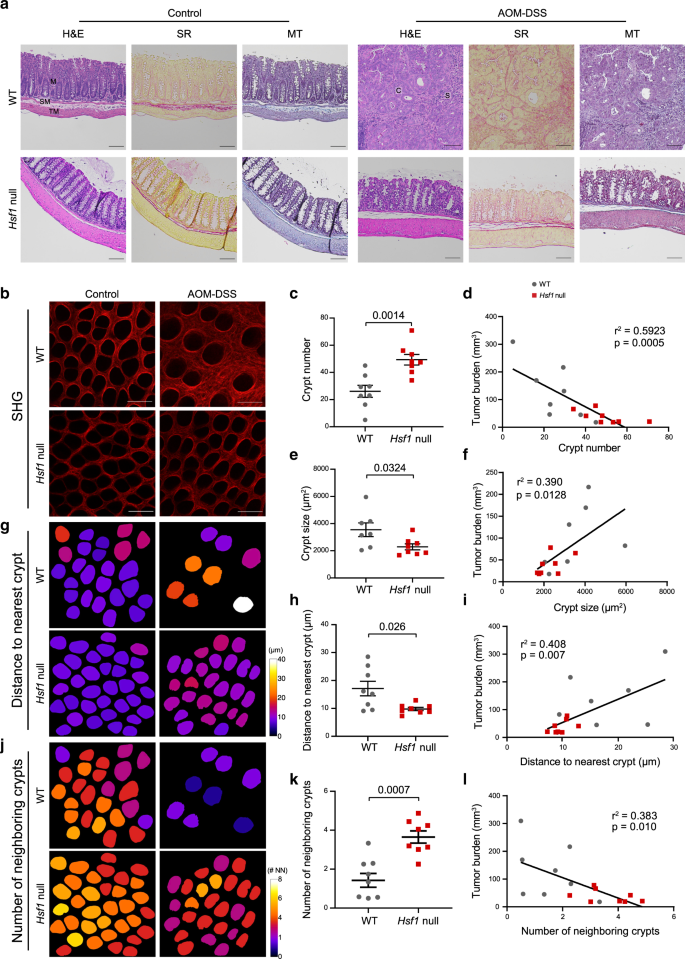 Selected main figure from this work: