Two-photon absorption (TPA) and other nonlinear spectroscopic techniques are very important tools for both fundamental and applied research, as they provide the possibility to examine atomic and molecular transition levels unattainable with single-photon absorption (SPA) [1]. Two-photon fluorescence microscopy is a nonlinear live-cell imaging technique based on simultaneous absorption of two photons to induce fluorescence. The use of a focused high-intensity infrared light beam to excite fluorophores provides deeper depth penetration, reduced photodamage, inherent z-sectioning, and lack of out-of-focus bleaching. However, the use of relatively high peak power pico- and femtosecond pulsed lasers to achieve sufficient amount of simultaneously absorbed infrared photons causes photodamage, photobleaching, and heating in the biological sample [2].

Our work addresses the shortcomings arising due to the use of high peak power pulsed lasers in classical TPA (CTPA) by exploiting the concept of entangled two-photon absorption (ETPA). The absorption rate for CTPA (Rc) of two independent single photons depends quadratically on their flux Ф, Rc=δΦ2 , where δ refers to the classical TPA cross-section with units cm4s. However, entangled photon pairs act in this case as a single quantum particle and, consequently, the linear absorption rate is obtained, Re=σeΦpair. Here, Φpair is the photon pair rate per unit area, and σe [cm2] refers to the ETPA cross-section. Therefore, the combined two-photon absorption rate is given as R2=δΦ2+ σeΦpair [3]. Thus, ETPA dominates at low photon fluxes with a linear absorption rate dependence on the photon pair rate.

Our experimental setup shown in Figure 1, comprises two modules: an SPDC source and a microscope module. The generation of time-correlated photon pairs is driven by a fiber-coupled 405nm CW-laser. The collimated pump is focused onto a 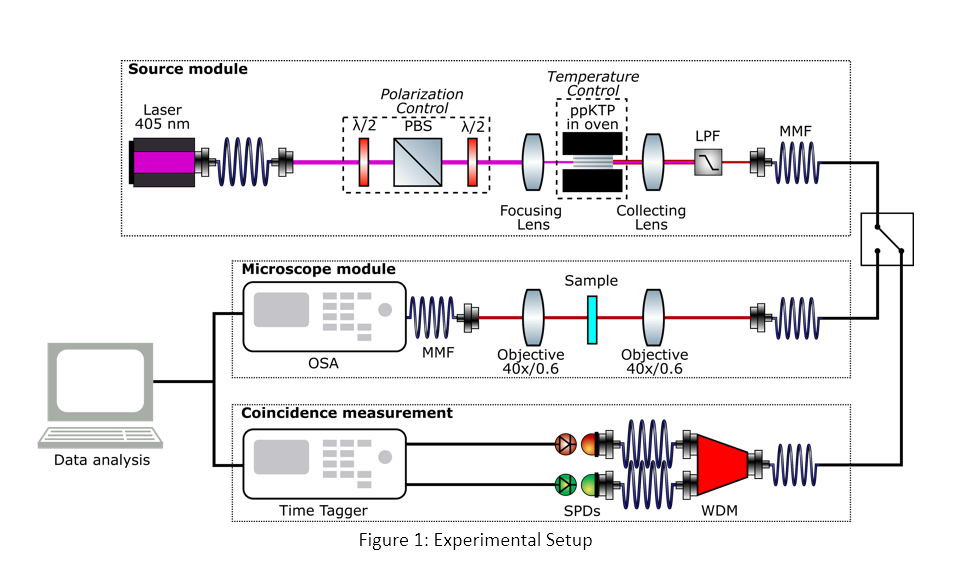 ppKTP crystal, prior to which a polarizing beam splitter between two half-wave plates is used to control the polarization of the pump beam and the power incident on the crystal. The SPDC photons, generated by the crystal placed in an oven for temperature control, are collimated using a lens and coupled into a multi-mode fiber after filtering out the pump photons. These photons are transferred to the transmission microscope module consisting of a focusing and a collection objective lens, where the photons are focused on the sample containing cuvette, and transmitted SPDC photons are collected. The transmission spectra of the sample are obtained using highly sensitive VIS-NIR spectrometer, and photon pairs coincidence rate is obtained using a time tagger to achieve optimal alignment for maximal photon-pair flux. The samples are prepared using chloroform as the solvent for acridine and rhodamine-based dyes with concentrations ranging from 2mM to 50mM.

Our experimental results, together with our modular and fiber-coupled setup design, may pave the way towards low-cost, high-efficiency, and sensitive two-photon fluorescence microscopy.